The Diary of Thomas Victor Rayson-1916 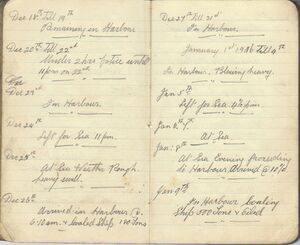 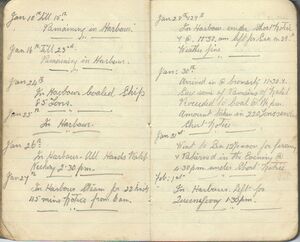 In harbour. Left for Queensferry 1.30pm. 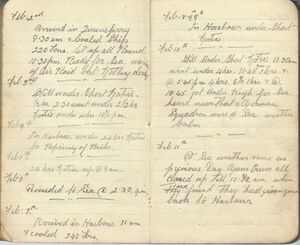 In harbour. Under 24 hrs notice for repairing of boiler

In harbour under short notice

@ sea weather same as previous day Guns crews all closed up till 10 o/c am when we found they had gone back to harbour. 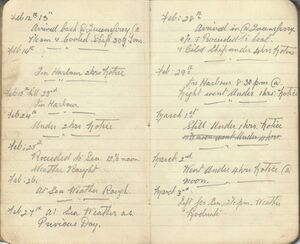 At sea weather as previous day 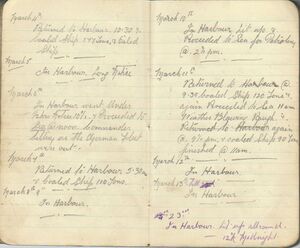 In harbour went under 1/2 hrs notice 10 o/c & proceeded to sea @ noon Commander telling us the German Fleet were out.

In harbour lit up & proceeded to sea for patrolling @ 2 o/c pm. 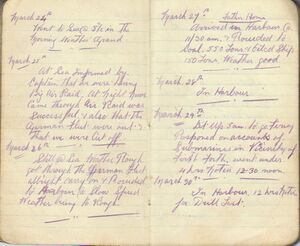 Went to sea @ 5 o/c in the morning weather grand

At sea informed by Captain that we were having big air raid. At night news came through air raid was successful & also that the German fleet were out & that we were cut off

Still @ sea weather rough. Got through the German fleet allright carry on & proceeded to harbour @ slow speed weather being to rough.

Lit up 5am to go firing postponed on accounts of submarines in vicinity of Firth of Forth. Went under 4 hrs notice 12-30 noon. 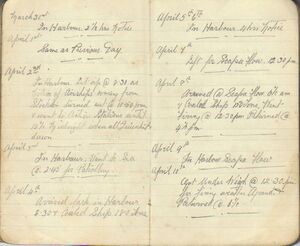 In harbour. Lit up @ 8.30 as notice of airships coming from Stockholm turned out @ 10.50 pm. & went to action stations until 12 o/c midnight when all quietened down. 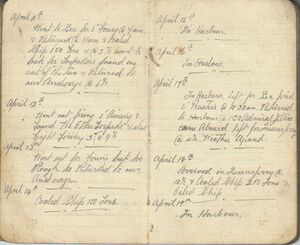 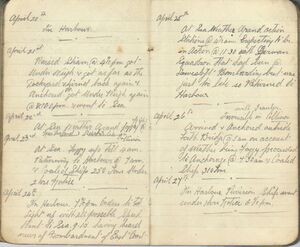 In harbour. 7 o/c ordered to light up with all possible speed. Went to sea 9.10 having heard of news of bombardment of east coast.

At sea weather grand action stations @ 4 o/c am Expecting to be in action @ 11.30 with German squadron that had been @ Lowestoft bombarding but was just too late so returned to harbour

Invincible in collision with trawler. Arrived & anchored outside Forth Bridge @ 5am on account of weather being foggy. Proceeded to anchorage @ 7.30 am & coaled ship 310 tons. 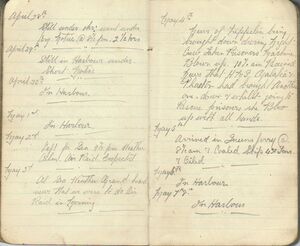 Still in harbour under short notice

At sea weather grand. Heard news that we were to do air raid in morning

News of Zeppelin being brought down during night. Crew taken prisoners machine blown up. 10 o/c received news that H.M.S. Galatea & Phaeton had bought another one down & whilst going to rescue prisoners she blew up with all hands. 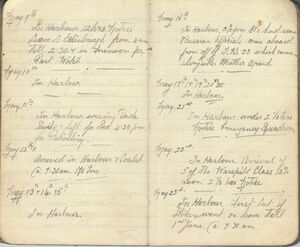 In harbour 12 hrs notice leave to Edinburgh from 8am till 2.30 & in forenoon for Port Watch.

In harbour 3 o/c pm We had some Russian Officials come aboard from off of T.B.33 which came alongside. Weather grand

In harbour. First lot of Stokers went on leave till 1st June @ 7.30am 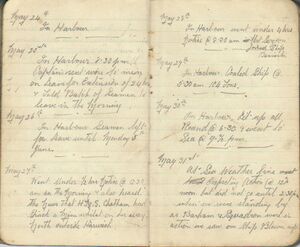 In harbour 8.30 from Captain sent wire to men on leave for extension of 24 hrs & Told Batch of Seamen to leave in the morning.

In harbour Seamen left for leave until Monday 5th June.

Went under 1/2 hrs notice @ 12.30 am in the morning & also heard the news that H.M.S. Chatham had struck a mine whilst on her way North outside Harwich.

At sea weather find expecting action @ 12 o/c noon but did not go until 2.30 pm when we were standing by as Barham & squadron were in action we saw one Ship Blown up 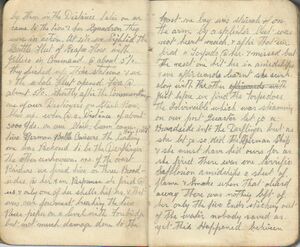 by them in the Distance later on we came to the Lion & her squadron they were in action. At 4o/c we sighted the Battle Fleet of Scapa FLow with Jellico in Command @ about 5o/c they picked up their stations & we & whole fleet opened fire @ about 5o/c. Shortly after the commencement one of our destroyers on Starb Bow blew up. When @ a Distance of about 5000 yds. on our starb beam came range 6500 yds five German Battle Cruisers the leading one was reckoned to be the Derflinger. The other unknown one of the coast raiders we fired five or three Broadsides @ her & in response she fired @ us & only one of her shells hit us & that was our foremast breaking the live voice pipes on a level with forebridge but not much damage done to the mast. One boy was struck [of - deleted] on the arm, by a splinter but was not hurt much & after that we fired a torpedo @ her & missed but the next one hit her in amidships & we afterwards learnt she sunk along with the other just before we fired the torpedoes. The Invincible which was steaming on our port quarter let go a broadside into the Derflinger but as she let go so did the German ship & she must have hit ours for as she fired there was one terrific explosion amidships a sheet of flame & smoke when that cleared away there was nothing left of her only the two ends sticking our of the water nobody saved as yet this happened between 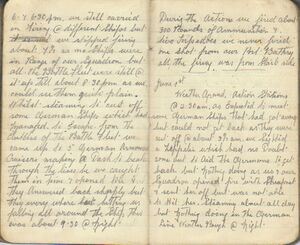 6 & 6.30 pm. we still carried on firing @ different ships but we stopped firing about 7o/c as no ships were in range of our squadron but all the Battle Fleet were still @ it up till about 8.30 pm as we could see them quite plain.
Whilst steaming to cut off some German ships which had managed to escape from the clutches of The Battle Fleet. We came up to 5 German armoured cruisers making a dash to break through the lines be we caught them in time & opened fire & they answered back sharply but they every where but hitting us falling all around the Ship this was about 9.30 @ night.
During the action we fired about 300 rounds of ammunition & two torpedoes were fired one shot from our Port battery all the firing was from Starb side

Weather grand action stations @ 2.30 am, as expected to meet some German ships that had got away but could not get back as they were cut off @ about 3o/c am. We sighted a Zeppelin which had no doubt come out to aid the Germans to get back, but nothing doing as us & our squadron opened fire with shrapnel & sent her off but was not able to hit her. Steaming about all day but nothing doing in the German line weather rough @ night 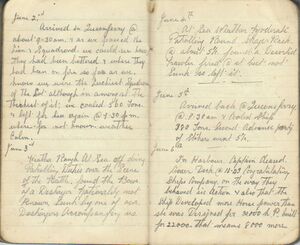 Arrived in Queensferry @ about 9.30 am. & as we passed the Lion & squadron and we could see how they had been battered & where they had been on fire so far as we know we were the luckiest squadron of the lot although in amongst the thickest of it: we coaled 560 tons. & left for sea again @ 7.30 pm. where -for not known. Weather calm.

Weather rough at sea doing patrolling duties over the scene of the Battle found the bows of a Destroyer nationality not known sunk by one of our Destroyers accompanying us.

At sea weather moderate patrolling round Skager Rack[4] @ about 5o/c found a deserted trawler fired @ it but not sunk so left it.

In harbour Captain cleared lower deck @ 11.45 congratulating ships company of the way they behaved in action & also that the ship Developed more horse power than she was Designed for 30,000 h.P built for 22000. That means 8000 more 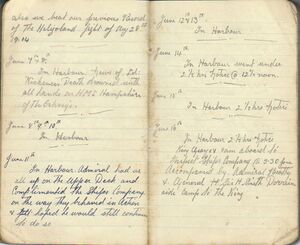 In harbour. News of Ld Kitcheners Death drowned with all hands on HMS Hampshire of the Orkneys. 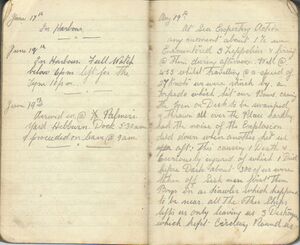 In harbour. Full watch below 6pm left for The Tyne 10 pm.

At sea expecting action any moment about 1 o/c we encountered 3 Zeppelins & firing @ them during afternoon. Well @ 4.55 whilst travelling @ a speed of 27 Knots we were struck by a torpedo which hit our bows causing the men on Deck to be swamped & thrown all over the place hardly had the noise of the explosion died down when another hit us aft: This causing 1 death & 6 seriously injured of which 1 Died before Dark about 300 of us were taken off sick men first then boys in a trawler which happened to be near all The Other Ships left us only leaving us 3 Destroyers which kept Circling Round us 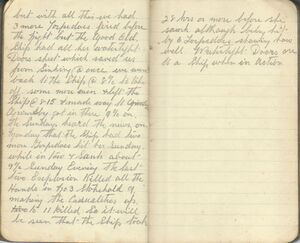 but with all this we had 3 more torpedoes fired before the night but The Good Old Ship had all her watertight doors shut which saved us from sinking @ once we went back to the ship @ 8o/c to take off some more men & left the ship @ 8.15 & made way to Grimsby got in there 9o/c on the Sunday. Heard the news on Monday that the ship had two more torpedoes hit her Sunday while in tow & sank about 9o/c Sunday evening. The last two explosion killed the Hands in No3 Stokehold & making the casualties up to 11 killed So it will be seen that the ship took 28 hrs or more before she sank although being hit by 6 torpedoes show how well watertight doors are to a ship when in action

Retrieved from "https://battleofjutlandcrewlists.miraheze.org/w/index.php?title=The_Diary_of_Thomas_Victor_Rayson-1916&oldid=19013"
Cookies help us deliver our services. By using our services, you agree to our use of cookies.