The Diary of Thomas Victor Rayson 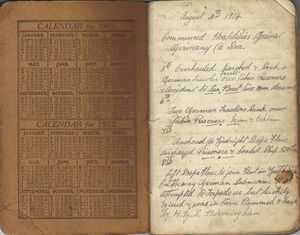 Left Scapa Flow to join fleet in North Sea. On the way German submarine U15 attempted to torpedo us but luckily missed & was in turn rammed & sunk by H.M.S. Birmingham 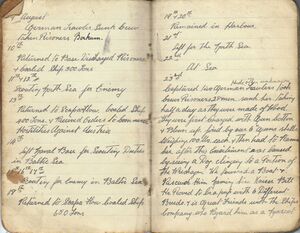 Left naval base for scouting duties in Baltic Sea.

Scouting for enemy in Baltic Sea

Left for the North Sea.

Captured two German trawlers. Heide, other unknown took crews prisoners 28 men. Sunk her taking half a day as they were made of wood. They were first charged with gun cotton & blown up fired by our 6" guns shells weighing 100 lbs each & then had to ram her. After this excitement was caused by seeing a dog clinging to a portion of the wreckage. We lowered a boat & rescued him naming him Kaiser Bill. He proved to be a pup with 6 different breeds & is great friends with the ships company who regard him as a mascot 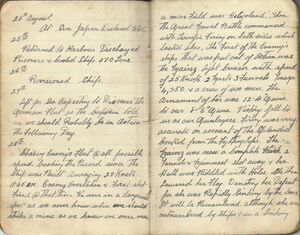 Left for sea expecting to discover the German fleet as the Captain told us we should probably be in action the following day.

Chasing enemy's fleet @ all possible speed breaking the record since the ship was built averaging 28 Knots 11.45 AM. Enemy overtaken & first shot fired @ that time we were in a dangerous spot as we never knew when we should strike a mine as we knew we were near a mine field near Heligoland. Then The Great Naval Battle [1]commenced with terrific firing on both sides which lasted 2 hrs. The first of the enemy's ships that was put out of action was The Mainz light cruiser with speed of 25 knots 2 masts 3 funnels tonage 4.350 & crew of 400 men. The armament of her was 12-4" guns to our 8-6" guns. Victory fell to us as our Gunlayers firing was very accurate on account of the splendid control from The fighting tops. The Mainz was now a complete wreck 2 funnels & mainmast shot away & her hull was riddled with holes. She then lowered her flag denoting her defeat for she was rapidly sinking by the bows. It will be remembered although she was outnumbered by ships & in a sinking 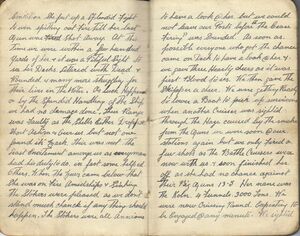 condition she put up a splendid fight to our spitting out fire till her last gun was shot away. At this time we were within few hundred yards of her & it was a pitiful sight to see her decks littered with dead & wounded & many more struggling for their lives in the water. As luck happened or by the splendid handling of the ship we had no damage done. Their range was faulty as the shells either dropped short astern & over us but not one found its mark. Their was not the least excitement amongst us as everyman had his duty to do in fact some helped others. When the news came below that she was on fire amidships & sinking the Stokers were pleased as we don't stand much chance if anything should happen. The Stokers were all anxious to have a look @ her but we could not leave our posts before "The Cease Firing" was sounded. As soon as possible everyone who got the chance came on deck to have a look @ her & we gave three hearty cheers as it was first blood to us. We then gave the Skipper a cheer. We were getting ready to lower a boat to pick up survivors when another cruiser was sighted through the haze caused by the smoke from the guns we were soon @ our stations again but we only fired a few shots as the Battle Cruisers were now with us & soon finished her off as she had no chance against their big guns 13.5. Her name was The Koln. 4 funnels 3000 tons. We were now cruising round expecting to be engaged @ any minute. We sighted 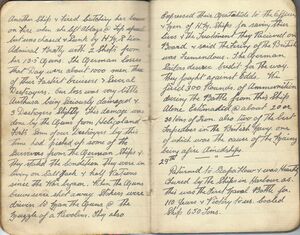 another ship & fired catching her bows on fire when she left ablaze @ top speed but was chased & sunk by H.M.S. Lion Admiral Beatty with 2 shots from her 13.5 guns. The German losses that day were about 1000 men. Three of their fastest cruisers & several destroyers. Our loss was very little Arethusa being seriously damaged & 3 destroyers slightly This damage was done by the guns from Heliogoland forts Some of our destroyers by this time had picked up some of the survivors from the German ships & they stated the condition they were in living on Salt Jack & half rations since the war began. When the guns crews were shot away Stokers were driven to man the guns @ the muzzle of a revolver. They also expressed their gratitude to the officers & men of H.M. Ships for saving their lives & the treatment they received on board & said the firing of the British was tremendous. The German sailors deserve credit for the way they fought against the odds. We fired 300 rounds of ammunition during the Battle from this ship alone estimated @ about 20 or 30 tons of iron. Also two of the best torpedoes in the British Navy one of which was the cause of the Mainz being afire amidships

Returned to Scapa Flow & was heartily cheered by the ships in harbour as this was the first naval battle for 110 years & victory to us. Coaled ship 650 tons. 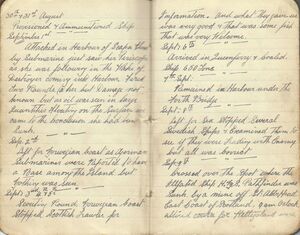 Attacked in harbour of Scapa Flow by submarine just saw her periscope as she was following in the wake of destroyers coming into harbour. Fired two rounds @ her but damage not known but as oil was seen in large quantities floating on the surface we came to the conclusion she had been sunk

Left for Norwegian coast as German submarines were reported to have a base among the islands but nothing was seen.

Scouting round Norwegian coast stopped Scottish trawler for information and what they gave us was very good & that was some fish that was very welcome.

Remained in harbour under the Forth Bridge

Crossed over the spot where the illfated ship H.M.S Pathfinder was sunk by a mine off St. Abbs Head East Coast of Scotland 9 am Oclock altered course for Heligoland were On proceeding to harbour sighted some floating mines within a 100 yds: of us & warned the Dreadnought Fleet which was coming up astern of us. Weather @ time being rough.

Carried on patrolling off the Norwegian coast 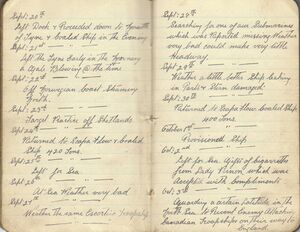 Searching for one of our submarines which was reported missing weather very bad could make very little headway.

Left for sea. Gifts of cigarettes from Lady Vernon [2] which was accepted with compliments 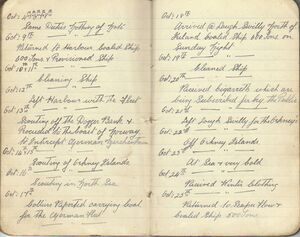 Same duties nothing of note

Left harbour with the fleet

Received cigarettes which are being subscribed for by the public.

Left Lough Swilly for The Orkney's 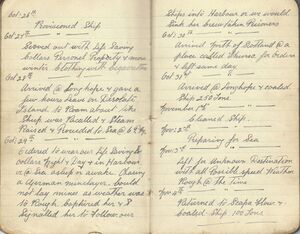 Ordered to wear our life saving collars night & day & in harbour or @ sea asleep or awake. Chasing a German minelayer. Could not lay mines as weather was to rough. Captured her & signalled her to follow our ships into harbour or we would sink her Crew taken prisoners

Left for unknown destination with all possible speed. Weather rough @ the time. 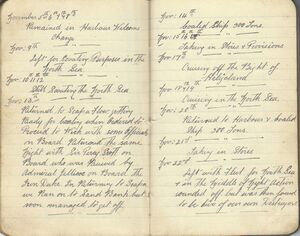 Left for scouting purposes in the North Sea.

Returned to Scapa Flow getting ready for coaling when ordered to proceed to Wick with some officers on board. Returned the same night with Sir Percy Scott on board who was received by Admiral Jellicoe on board the Iron Duke. In returning to Scapa we ran on to sand bank but soon managed to get off.

Cruising off the Bight of Heligoland

Cruising in the North Sea. While steaming in North Sea were attacked by aeroplane previous to this our own seaplane had attacked Zeebrugge & a German submarine sighted the German aeroplane dropped some bombs, narrowly missing H.M.S. Liverpool ourselves only about 600 yds off. We fired @ him & he very soon made tracks for home. And during the day we could hear the forts of Heligoland firing on some of our own fleet as they were within range & we were expecting their fleet to come out but nothing doing.

Left harbour for patrolling duties in the North Sea. 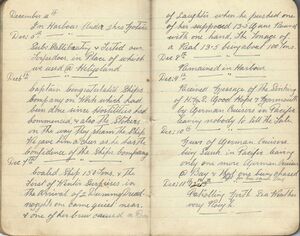 In harbour under 2 hrs notice

Captain congratulates Ships Company on work which had been done since hostilities had commenced & also The Stokers on the way they steam the ship. We gave him a cheer as he has the confidence of the Ships Company

Coaled ship 150 tons & the first of winter surprises in the arrival of 2 dummy Dreadnoughts one came quite near & one of her crew caused a roar of laughter when he pushed one of her supposed 13.5 guns round with one hand. The tonnage of a real 13.5 being about 100 tons.

Received message of the sinking of H.M.S Good Hope & Monmouth [3]by German cruisers in Pacific leaving nobody to tell the tale.

News of German cruisers being sunk in Pacific leaving only one more German cruiser @ bay & that one being chased. Left for sea same day 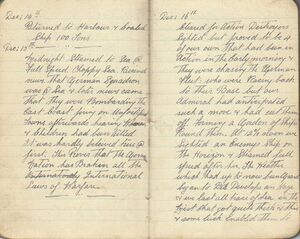 Midnight steamed to sea @ full speed. Choppy sea. Received news that German Squadron was @ sea & later news came that they were bombarding the east coast firing on unfortified towns. Afterwards hearing woman & children had been killed. It was hardly believed true @ first. This proves that the German nation has broken all the international laws of warfare.

Cleared for actions destroyers sighted but proved to be 4 of our own that had been in action in the early morning & they were chasing the German fleet: who were racing back to their base but our Admiral had anticipated such a move & had cut them off. Forming a cordon of ships round them. At 12o/c noon we sighted an enemy ship on the horizon & steamed full speed after her. The weather which had up to now been clear began to develop an haze & we lost all trace of her in the mist that got quite thick & this & some luck enabled them to 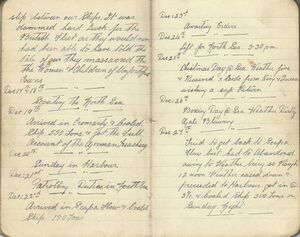 slip between our ships. It was dammed hard luck for The British Fleet as they would never had been able to have told the tale of our they massacred the the women & children of unfortified towns

December 28th to December 31st in next section

Retrieved from "https://battleofjutlandcrewlists.miraheze.org/w/index.php?title=The_Diary_of_Thomas_Victor_Rayson&oldid=18763"
Cookies help us deliver our services. By using our services, you agree to our use of cookies.