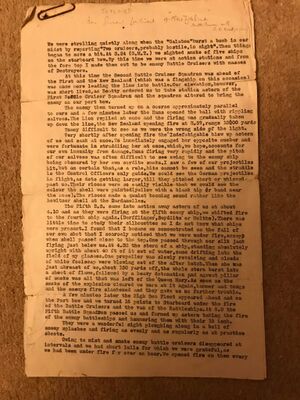 We were strolling quietly along when the "Galatea" burst a bomb in our
midst by reporting "Two cruisers, probably hostile, in sight". Then things
began to move a bit. At 3.24 (G.M.T.) we sighted smoke of five ships
on the starboard bow. By this time we were at action stations and from
the fore top I made them out to be enemy Battle Cruisers with masses
of Destroyers.

At this time the Second Battle Cruiser Squadron was ahead of
the First and the "New Zealand" (which was a flagship on this occasion)
was once more leading the line into battle. Our elevation, however,
was short lived, as Beatty ordered us to take station astern of the
First Battle Cruiser Squadron and the squadron altered to bring the
enemy on our port bow.

The enemy then turned up on a course approximately parallel
to ours and a few minutes later the Huns opened the ball with rippling
salvoes. The Lion replied at once and the firing was gradually taken
up down the line, the New Zealand opening fire at 3.57, range 18000 yards
Enemy difficult to see as we were the wrong side of the light.
Very shortly after opening fire the "Indefatigable" blew up astern
of us and sank at once. We immediately engaged her opposite number and
were fortunate in straddling her at once, which, we hope, accounts for
our own immunity from damage. Huns firing very rapidly and the pitch
of our salvoes was often difficult to see owing to the enemy ship
being obscured by her own cordite smoke. I saw a few of our projectiles
hit, but am certain that, as a rule, hits cannot be seen and the straddle
is the Control Officers only guide. We could see the German projectiles
in flight, as dots getting larger, till they pitched short or whizzed
past us. Their riccos were so easily visible that we could see the
colour the shell were painted (yellow with a black tip or band near
the nose). The riccos made a quaint booming sound rather like the
howitzer shell at the Dardanelles.

The Fifth B.S. came into action away astern of us at about
4.10 and as they were firing at the fifth enemy ship, we shifted fire
to the fourth ship again. (Derfflinger, Seydlitz or Moltke). There was
little time to study their silhouettes so I do not know what ships
were present. I found that I became so concentrated on the fall of
our own shot that I scarcely noticed that we were under fire, except
when shell passed close to the top. One passed through our silk jack
flying just below us. At 4.32 the stern of a ship, standing absolutely
upright with about 40 ft of it out of the water, came drifting into the
field of my glasses. One propeller was slowly revolving and clouds
of white foolscap were blowing out of the after hatch. When she was
just abreast of us, about 150 yards off, the whole stern burst into
a sheet of flame, followed by a heavy detonation and agreat pillar
of smoke was all that was left of the "Queen Mary". As soon as the
smoke of the explosion cleared we were at it again, hammer and tongs
and the enemys fire slackened and they gave us no further trouble.

A few minutes later the High Sea Fleet appeared ahead and on
the Port bow and we turned 16 points to Starboard under the fire
of the Battle Cruisers and the van of the Battleships. At 5.0 the
Fifth Battle Squadron passed us and formed up astern taking the fire
of the enemy battleships and hammering them with their 15 inch.

They were a wonderful sight ploughing along in a boil of
enemy splashes and firing as evenly and as regularly as at practice
shoots.

Owing to mist and smoke enemy battle cruisers disappeared at
intervals and we had short lulls for which we were grateful, as
we had been under fire for over an hour. We opened fire on them every 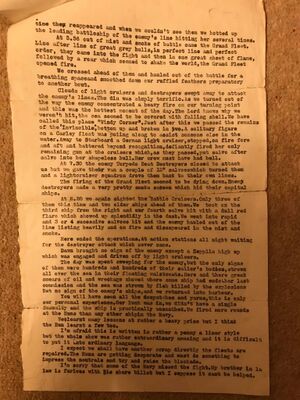 time they reappeared and when we couldn't see them we hotted up
the leading battleship of the enemy's line hitting her several times.
At 5.56 out of mist and smoke of battle came the Grand Fleet.
Line after line of great grey hulls, in perfect line and perfect
order, they came into the fight and then in one great sheet of flame,
followed by a roar which seemed to shake the world, the Grand Fleet
opened fire.

We crossed ahed of them and hauled out of the battle for a
breathing spaceand smoothed down our ruffled feathers preparatory
to another bout.

Clouds of light cruisers and destroyers swept away to attack
the enemy's lines. The din was simply terrific. As we turned out of
the way the enemy concentrated a heavy fire on our turning point
and this was the hottest moment of the day. The Lord knows why we
weren't hit, the sea seemed to be covered with falling shell. We have
called this place "Windy Corner". Just after this we passed the remains
of the "Invincible", bottom up and broken in two. A solitary figure
on a Carley float was poling along to assist someone else in the
water. Away to Starboard a German light cruiser, stopped, on fire fore
and aft and battered beyond recognition, defiantly fired her only
remaining gun at the cruisers which, as they passed, put salvo after
salvo into her shapeless hull. Her crew must have had hell.

At 7.30 the enemy Torpedo Boat Destroyers closed to attack
us but we gave their van a couple of 12" salvoes which turned them
and a light cruiser squadron drove them back to their own lines.

The firing of the Grand Fleet seemed to be dying down. Enemy
destroyers made a very pretty smoke screen which hid their capital
ships.

At 8.20 we again sighted the Battle Cruisers. Only three of
them this time and two older ships ahead of them. We took on the
third ship from the right and our fourth salvo hit with a dull red
flare which showed up splendidly in the dusk. We went into rapid
and 3 or 4 successive salvoes hit and the enemy hauled out of the
line listing heavily and on fire and disappeared in the mist and
smoke.

Here ended the operations. At action stations all night waiting
for the destroyer attack which never came.

Dawn brought no sign of the enemy except a Zepplin high up
which was engaged and driven off by light cruisers.

The day was spent sweeping for the enemy, but the only signs
of them were hundreds and hundreds of their sailor's bodies, strewn
all over the sea in their floating waistcoats. Here and there great
smears of oil and wreckage showed where some ship had ended her last
commission and the sea was strewn by fish killed by the explosions
But no sign of the enemy's ships, and we returned into harbour.

You will have seen all the despatches and yarns, this is only
our personal experience, Our luck was in, we didn't have a single
casualty and the ship is practically unscathed. We fired more rounds
at the Huns than any other ship in the Navy.

We learnt many lessons at rather a heavy price but I think
the Hun learnt a few too.

I'm afraid this is written in rather a penny a liner style
but the whole show was rather extraordinary amazing and it is difficult
to put it into ordinary language.

I expect we shall have another scrap directly the fleets are
repaired. The Huns are getting desperate and must do something to
impress the neutrals and try and raise the blockade.

I'm sorry that some of the Navy missed the fight. My brother in la
law is furious with his shore billet but I suppose it cant be helped.

Retrieved from "https://battleofjutlandcrewlists.miraheze.org/w/index.php?title=Smith,_Arthur_Douglas_Wales&oldid=19947"
Category:
Cookies help us deliver our services. By using our services, you agree to our use of cookies.