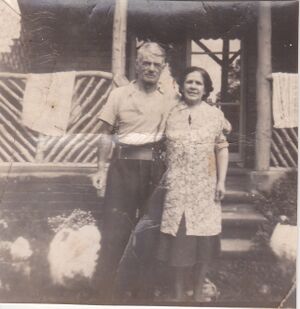 Shackleton died in his arms

Shackleton died in his arms
Mr. GEORGE HENRY ROSS, of 18, Havelock Road, Yarmouth, who was with Shackleton on his 1921-22 expedition to the South Pole, died at Northgate Hospital on Sunday, aged 76.

Sir Ernest Shackleton, he recalled, died in his arms on January 5th, 1922, and he made the cross for the explorer's grave in South Georgia.

Mr. Ross was one of the last survivors of the ill-fated Shackleton expedition. He was whaling in South Georgia when he joined the ship Quest as a donkeyman.

He was born in London and, at the start of an adventurous career, went to sea when he was 14.

In 1913 he went to the Shetlands, where two years later he married a Shetland girl.

Mr. Ross was one of the first men from the Shetlands to join up at the outbreak of the first world war. He was in the battle of Jutland,[1] and was seriously injured while serving in the Royal Navy.

Lumberjack
After that war he went to South Georgia. Between the Shackleton expedition and the second world war he worked as a lumberjack in Canada.
Then he joined up again for service in the second war. Two of the ships in which he served as a gunlayer were torpedoed.

For a time during the war he was based in Lowestoft. As well as whaling and lumberjacking, the other jobs Mr. Ross tackled including helping in hospitals and fishing. He claimed that there was not a country in the world he had not visited. He travelled round the world eight times.

Mr. Ross came to Yarmouth from the Shetlands after the last war with the Scottish herring fleet. His wife, Mrs. Annie Ross, worked for more than 40 years as a fisher girl.

Mr. and Mrs. Ross went into the boarding-house business at Yarmouth.
They gave up their Albert Square boarding-house last September and moved to Havelock Road. The only this they insisted on taking with them was the name of the house -- Shackleton House. 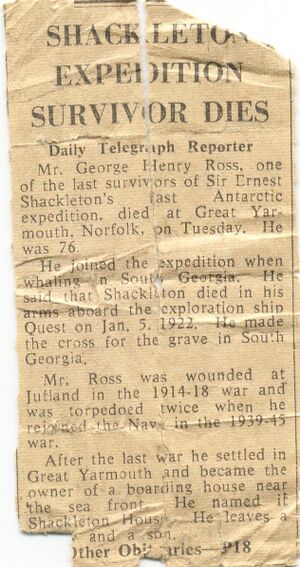 He joined the expedition when whaling in South Georgia. He said that Shackleton died in his arms aboard the exploration ship Quest on Jan. 5, 1922. He made the cross for the grave in South Georgia.

After the last war he settled in Great Yarmouth and became the owner of a boarding house near the sea front. He named it Shackleton House. He leaves a _____ and a son.

Retrieved from "https://battleofjutlandcrewlists.miraheze.org/w/index.php?title=Ross,_George_Henry&oldid=17830"
Category:
Cookies help us deliver our services. By using our services, you agree to our use of cookies.