Sir, I have the honour to submit the attached brief report of the part taken by your Flagship. IRON DUKE during the Action with the German High Sea Fleet off the Coast of Jutland on the 31st May 1916.


2. As no casualties occurred on board " Iron Duke," which was not hit by the Enemy's fire, no strain was thrown on the Ship's personnel or organization and, consequently, I am not specially mentioning the services of particular Officers and Men. The bearing of all was in every way admirable.^ I have the honour to be,
Sir,

BRIEF ACCOUNT OF THE ACTION OFF JUTLAND OF 31sT MAY 1916

The attached Notes on the Action by the following Officers are forwarded as they are of interest, not only in describing events, but also any difficulties they had to cope with.

All times given are G.M.T. All Courses Magnetic.
I was in the Conning Tower with Captain Oliver E. Leggett, Master of the Fleet, and Lieutenant Commander (T) Edward W. 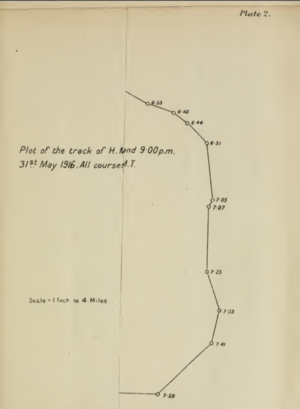 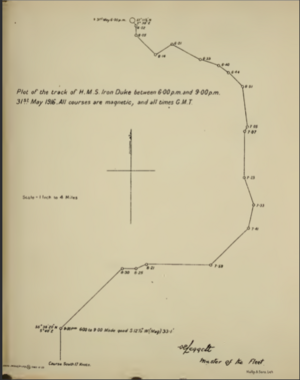 MacKichan, R.N.,throughout the Action, and had a very good view of the whole situation.
The Communications worked very well. The Navyphones were noticeably better than Voicepipes, the former requiring no shouting, but it is fully realised that Voicepipes possess the great advantage of reliability—in fact, they have to be blown away before being out of action.
The Light was bad, the weather being misty, the visibility varying during the actual firing from 10,000 to about 16,000 yards.
At 4.0 p.m.—" Action " was sounded, the Hands having had Tea, and the Decks having been cleared up.
All preparations for Immediate Action were then made.
At 6.0. p.m.—Course was S.E.—20 knots.
At 6.2 p.m.—Altered Course by 9 Pendant to S.—18 knots.
At 6.5 p.m.—Altered Course by 9 Pendant to S.E.
At 6.14 p.m.—Formed Line of Battle to Port by Equal Speed Pendant. Co. S.E. by E. IRON DUKE being "straddled" at this time by two Enemy's Heavy Projectiles, with large "spread."
Our Battle Cruisers, which had shortly before come in sight on a Southerly bearing, firing to South Westward, rapidly cleared the Battle Line, disclosing a German 3-funnelled Cruiser somewhat like the KOLBERG Class, but with larger Funnels, she was apparently stopped and on fire.
6.23 p.m. —Opened Fire with the Turrets on the 3-funnelled Cruiser. Bearing about 80 Green. Range, 11,000. Fall of Shot very easy to observe. The 3rd Salvo Straddled. After the 4th Salvo—Ceased Fire.
6.25 p.m.—Speed 15 knots.
6.30 1/2 p.m.—Opened Fire on a Battleship of KÖNIG Class. Bearing 70 Green—Range, 12,000. The 2nd, 3rd, and 4th Salvoes hitting her, with a total of at least 6 Hits. Enemy Steaming in the same direction as IRON DUKE on a slightly converging course.
6.33 p.m.—Course S. 71° E. 17 knots. The Bearing of the Enemy was now S. 14° W. The Bearing of the Sun was N. 54° W. The Enemy was lit up by the Sun, whereas IRON DUKE was probably invisible to them in the mist. However that may be, the KÖNIG Battleship did not return IRON DUKE's Fire, although heavily hit. 9 Salvoes, comprising a total of 43 rounds, were fired at her in 4 minutes 50 seconds.
At 6.40 p.m.— Course S. 56° E.
At 6.44 p.m.—Course S. 46° E.
At 6.51 p.m.—Course S. 8° E.

At 7.05 p.m.—Course S.W. by S.
At 7.07 p.m.—Course South.
7.11 p.m.—6 in. Opened Fire on Enemy T.B.D.'s attacking the Battle Fleet. Green, 63 ° About 10,000 yds., and sank one Enemy T.B.D., and fired on another.
7.13 p.m.—Opened Fire with Turrets on Enemy Battleship, Green, 74. Range 15,400 yards. Enemy steaming nearly directly away. 4 Salvoes Fired, no hits were observed.
7.18 p.m.—Ceased Fire, as Enemy was hidden by a very good Smoke Screen made by his Destroyers.
7.20 p.m.-—Trained Turrets on Enemy Battle Cruiser bearing 99 Green, but before Fire could be opened she also was hidden by a Smoke Screen made by attending Enemy's T.B.D.'s.
At 7.23 p.m.—Course S. 19° E.
At 7.24 p.m.—6-in. Opened Fire on Enemy's T.B.D.'s attacking Battle Fleet. Green 115." Range, 10,000.
At 7.27 p.m.—Turrets opened fire, Green 110, Range 9,600 yards, on Enemy's T.B.D.'s Avhich were attacking the Battle Fleet. One Salvo fired, which the Director Gunner states blew up an Enem^^ T.B.D.
At 7.31 p.m.—Ceased Firing.
Total ammunition fired — 13-5-in. — 90 rounds.
6-in. — 50 rounds.
OAK reports that " at about 7.35 p.m. the track of a Torpedo was observed to cross the track of our ships, about 200 yards ahead of IRON DUKE, Torpedo was travelling slowly.
Track finished about 2,000 yards on the Port side of the Line, and the Torpedo sank. Direction of the track was S.E."
Another Torpedo was also reported by BENBOW which
was 4th ship astern of Iron Duke, at 8.31 p.m. It is
believed that the Torpedo passed ahead of Iron Duke, but
this was not seen by Iron Duke, although two signalmen
were specially stationed under a Signal Officer aloft, to look
out for Torpedoes.
It is quite possible that this is due to the difficult light
conditions rendering the track invisible from Iron Duke.
During the night, in view of the proximity of Heavy Enemy's
Ships, the Hands remained at Action Stations, the Gun's Crews
at their Guns, but being allowed to sleep in turn.
The Corned Beef and Biscuits provided at the Quarters were
served out. Cocoa was provided from 9.30 p.m. onwards, and
Breakfast brought to the Quarters at 7.30 a.m.
- * * * * * [1]

The Turrets were fired throughout by Director, which system possesses enormous advantages over any other in Action.
- * * * * * [2]
The close study which has been made of the Silhouettes of German ships enabled those sighted to be recognised, except a Battle Cruiser with very large square Funnels, which might have been the LÜTZOW.
The Rangefinders obtained very good results, notwithstanding the bad light, and were of the greatest assistance in keeping the range.
The Rangetakers reported that the Enemy's Pole Masts were easier to Range on than those of our own ships.
- * * * * * [3]
No Torpedoes were fired as the large number of our own ships which from time to time crossed the space between the Battle Fleets rendered it inadvisable to fire the slow E.R. Torpedoes, and the Enemy were out of Range for the 30 knot Setting.
The Engine Room Department experienced no difficulties during the action.

NOTES MADE BY LIEUTENANT RICHARD SHELLEY, R.N., ON IRON DUKES 13.5 IN. TRANSMITTING STATION

NOTES MADE BY SHORTHAND IN "B" TURRET OF H.M.S. IRON DUKE AT THE DICTATION OF LIEUTENANT COMMANDER T. F. P. CALVERT, R.N..

Retrieved from "https://battleofjutlandcrewlists.miraheze.org/w/index.php?title=Report_from_Iron_Duke&oldid=2743"
Cookies help us deliver our services. By using our services, you agree to our use of cookies.