D1a and b: The December raid, credited with being taken during the 1BCS’s pursuit of Hipper’s 1SG at the time of the Scarborough outrage, but it is more than likely that these were taken during the PZ which followed the abortive chase, while although admittedly all of a very poor grainy quality, they have been included here for obvious reasons. Firstly there is still sufficient clarity present to pick out very interesting features.

D2a and b: Two extremes of the seminal Dogger Bank action, HMS Queen Mary in dry-dock No.14, taken 19 January 1915, the reason why she missed the battle. While the second image although of a poor quality, shows the damaged HMS Lion surrounded by supporting vessels at Rosyth after her hits.

D3: Without doubt one on the most striking wartime images of the Queen Mary encountered, in this research. Was this view of her, along with other members of the 1BCS, lying at Rosyth one evening in 1915. Clearly displayed in this is her camouflage pattern, of a distinctive dark grey waterline band strake amidships, in direct contrast to her otherwise light grey appearance. Notice her early wartime changes, the removal of the sternwalks cover aft, basically through the result of storm damage incurred during a sweep in late 1914. The tarpaulin covered 3in anti-aircraft piece, just aft of the mainmast derrick, and the obvious provision of a director tower, and supporting struts to her foremast. (IWM SP2775)

D4a and b: Credited as being the last photograph to have been taken of the Queen Mary, this evocative image captures a number of interesting points on her last day. Paramount here has to be her final appearance, which was by May l9l6 by then the standard overall GF light grey, against which her stowed anti-torpedo net defence and its attendant booms are easily seen. Also just discernible again in this view is her stripped down sternwalk aft, her built up upper foremast platforms, supported by a tripod structure. And her recently added lattice framework on the after superstructure, carrying a searchlight platform. In this photograph, taken from the forecastle of the Tiger, not only the Queen Mary nearest the camera, but the Princess Royal, and then the Lion, can be identified beyond, as the battlecruisers adopted a staggered line formation. Two screening destroyers can also just be seen to the far left of this picture on the horizon. (IWM SP1605) 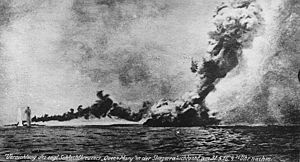 D5a and b: The only known photographic image of the final act in this battlecruisers short life, the demise of the Queen Mary, at 4.26pm on the afternoon of the 31 May 1916. The billowing column of smoke and steam is roughly the full 700ft length of the Queen Mary at its base, and extends to a height of some 2,000ft. (IWM SP1708)

Retrieved from "https://battleofjutlandcrewlists.miraheze.org/w/index.php?title=QM_The_Great_War&oldid=22456"
Cookies help us deliver our services. By using our services, you agree to our use of cookies.