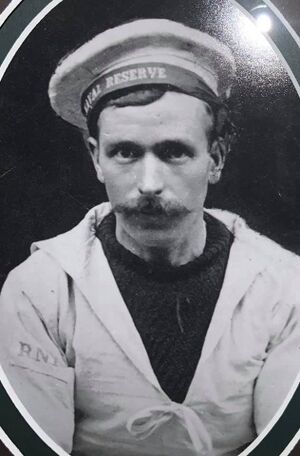 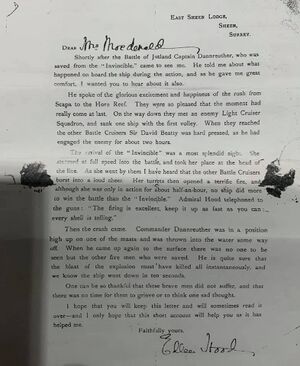 The name is complicated, for a variety of reasons explains Ron J Hoffman, his great grandson. The letter from Lady Hood, widow of the Admiral, was sent to Mrs MacDonald as his widow, and her first pension notification in November 1916 referred to him as Murdo MacDonald (although born on the ship's books as McLean - the story in the local Wick paper referring to him as a well known local fisherman, has him as Murdo McLean so that seems to be how he was known at home, at least by then, and in later pension correspondence. His parents were a McDonald and a McLean.)

Lady Hood appears to have written her comforting words about the speedy end of the ship, drawn from her meeting with Commander Dannreuther, the senior surviving officer of the ship, perhaps to the next of kin of all those lost. Even with help typing the letters this will have been a major task, but maybe was of help to her and her daughters, who seem to have assisted, as well as to those to whom she wrote.

Shortly after the Battle of Jutland, Captain Dannreuther, who was
saved from the " Invincible, " came to see me. He told me about what
happened on board the ship during the action, and as he gave me great
comfort, I wanted you to hear about it also.

He spoke about the glorious happiness and excitement of the rush from
Scapa to the Horn Reef. They were so pleased that the moment had
really come at last. On the way down they met an enemy Light Cruiser
Squadron, and sunk one ship with the first volley. When they reached
the other Battle Cruisers, Sir David Beatty was hard pressed, as he had
engaged the enemy for about two hours.

The arrival of the " Invincible " was a most splendid sight. She
steamed at full speed into the battle, and took her place at the head of
the line. As she went by them I have heard that the other Battle Cruisers
burst into a loud cheer. Her turrets then opened a terrific fire and,
although she was only in action for about half-an-hour, no ship did more
to win the battle than the " Invincible." Admiral Hood telephoned to
the guns: " The firing is excellent, keep it up as fast as you can :
every shell is telling."

Then the crash came. Commander Dannreuther was in a position
high up on one of the masts, and was thrown into the water some way
off. When he came up again to the surface there was no-one to be
seen but the other five men who were saved. He is quite sure that
the blast of the explosion must have killed all instantaneously, and
we know the ship went down in ten seconds.

One can be so thankful that these brave men did not suffer, and that
there was no time for them to grieve or to think one sad thought.

I hope that you will keep this letter and will sometimes read it
over-and I only hope that this short account will help you as it has
helped me.

Retrieved from "https://battleofjutlandcrewlists.miraheze.org/w/index.php?title=McLean,_MacDonald_Murdoch&oldid=20282"
Category:
Cookies help us deliver our services. By using our services, you agree to our use of cookies.