Letter about the battle from Lt Commander Arthur Marsden, one of only three survivors of his ship, to his friend Commander James Pipon of HMS Penelope

NB Numbers refer to the photo images of the letter, not to Arthur Marsden's numbering of his sheets. 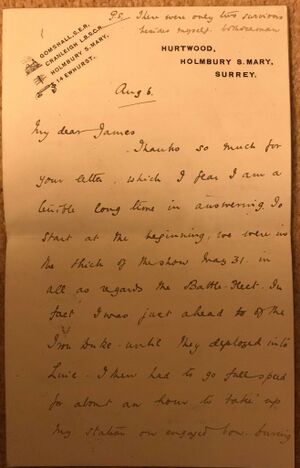 P.S. There were only two survivors besides myself both seaman

My dear James
Thanks so much for your letter, which I fear I am a terrible long time in answering. I start at the beginning, we were in the thick of the show May 31 in all as regards the Battle Fleet. In fact I was just ahead of the Iron Duke until they deployed into line. I then had to go full speed for almost and hour to take up my station on engaged bow. During 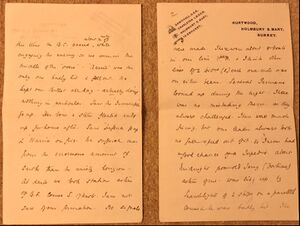 this time the B.C. passed about 1/2 mile off while engaging the enemy so we were in the middle of the "overs" - "Acasta" was the only one badly hit & fell out. We kept our Billet all day - actually doing nothing in particular. Saw the "Invincible" go up. Her bow & stern floating ends up for hours after. Saw "Defence" go up & "Warrior" on fire. We suffered more from the enormous amount of smoke than the misty horizon - At dark we took station astern of B.F. course S. 17 knots. I am not sure of our formation. No signals were made. There were about 8 boats in our line xxxx & I think other lines of 2 Divns (8) each one mile or so on either beam. Several Germans loomed up during the night. There was no mistaking them as they always challenged. There was so much firing but our leader always took us full speed out of it. So I never had a good chance of a torpedo. About midnight poor old Terry (Fortune) astern of me - was lit up by searchlights of 2 ships on a parallel course & he was badly hit. The 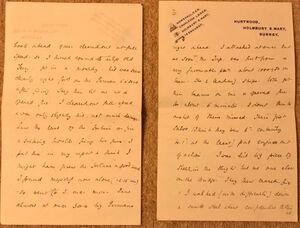 boat ahead of me cleared out at full speed so i turned round to help old Terry. Got in a torpedo. Hit was clearly seen on the German 55 secs after firing. They then lit me up & opened fire. I cleared out full speed & was only slightly hit. Not much damage. Saw the last of the “Fortune” on fire & sinking but still firing her guns. I put this in my report and think I might have given the “Fortune” a good word. I found myself now alone (12.15 am) so went to S once more. Saw almost at once 3 or 4 big Germans right ahead. I attacked at once but as soon as the torp was fired from a very favourable posn about 1000yds on beam. The 2 leading ships both got their beams on me & opened fire for about 5 minutes. I dont think a shot of theirs missed. Their first salvo (I think they were 6" - certainly 4.1" at the least) put engines out of action. I was hit big piece of shell in the thigh but no one else on the Bridge. They then ceased fire & I walked (with difficulty) down & saw to steel chest confidential letters etc 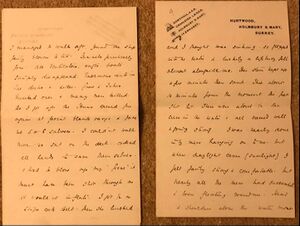 I managed to walk aft, found the ship fairly blown to bits. Funnels practically gone. All Ventilators, rafts, boats simply disappeared. Enormous rents in the decks and sides. Guns and tubes knocked over and many men killed. As I got aft the Huns opened fire again at point blank range & gave us 5 or 6 salvoes. I couldn't walk more so sat on the deck. Ordered all hands to save them selves. I tried to blow up my 'Gieve'. It must have been shot through as it would'nt inflate. I got 1/2 a ships cork Belt. Then she lurched and I thought was sinking so stepped into the water & luckily a life buoy fell almost alongside me. Her stern kept up a few minutes then sank. This about 10 minutes from the moment the first shot hit. There were about 1/2 the crew in the water & all seemed well & going strong. I was nearly done in by men hanging on to me but when daylight came (sunlight) I felt fairly strong & comfortable but nearly all the men had succumbed & were floating round me. Head & shoulders above the water most 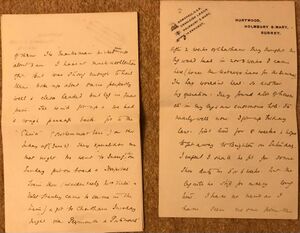 of them. The "Marksman" picked me up about 6 am. I havent much recollection of it. But was strong enough to hail them. Woke up about 8am perfectly well & clear headed but leg in great pain. The wind got up & we had a rough passage back. Got to the "China" (Northernmost base) on the Friday aft (June 2). They operated on me that night. We went to Invergordon on Sunday put on board a hospital train there (incidentally Mrs Victor & Violet Stanley came to see me on the train) & got to Chatham Tuesday night via Plymouth & Portsmouth. After 2 weeks at Chatham they thought the leg would heal in 2 or 3 weeks I came here (home the Watneys Lane for the summer). The leg wouldn't heal so another big operation. They found a lot of trouser etc in my leg & an enormous hole. Its nearly well now. I got up Friday last - first time for 8 weeks & hope to get away to Brighton on Saturday. I expect I shall be fit for some shore duty in 5 or 6 weeks. But the leg will be stiff for a very long time. I have no news as I have seen no one from the 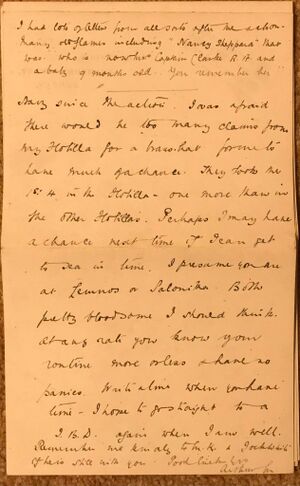 Navy since the action. I was afraid there would be too many claims from my Flotilla for a brass- hat for me to have much of a chance, They took the first 4 in the Flotilla – one more than in the other Flotillas. Perhaps I may have a chance next time if I can get to sea in time. I presume you are at Lemnos or Salonika. Both pretty bloodsome I should think. At any rate you know your routine more or less and have no panics. Write a line when you have time – I hope to go straight to a T.B.D. again when I am well. Remember me kindly to M.K. and Jock White if he is still with you. Good luck, yrs Arthur M

Note above line at head of page:

I had lots of letters from all sorts after the action. Many old flames including “Nancy Sheppard” that was who is now Mrs Captain Clarke R.A. and a baby 9 months old. You remember her !!


Sir,
I REGRET to report the loss through enemy gunfire of ARDENT at about 12.30 a.m. (G.M.T.) June 1st. Single line ahead was formed astern of the Battle Fleet after dark on 31st May. As far as I could judge, the line ARDENT was in consisted of: ACHATES, AMBUSCADE, ARDENT, FORTUNE, and several other Torpedo Boat Destroyers in rear. Course South, speed 17 knots. TIPPERARY's line appeared to be well out to the Starboard of us.

2. Various other ships were seen dimly and much firing going on, on either side until just after midnight, when four large ships appeared closing in on our Starboard hand, Course about S. by E. The leader challenged by switching on and off several groups of Green and Red lamps. Almost immediately they switched on Searchlights, picked up FORTUNE and opened fire. FORTUNE was hit at once. I altered to Starboard and endeavoured to assist FORTUNE, and from a very favourable position from about 2,000 yards on her port beam fired a torpedo at the leading enemy's ship, which undoubtedly scored a hit, the explosion was seen, and the enemy ship's foremost searchlights went off and she turned to Starboard. The second Ship in the line then fixed her searchlights and opened fire on ARDENT, so I increased speed and turned away to Port. I could see the FORTUNE badly hit, on fire, and apparently sinking, but still firing her guns in a most gallant manner at her big adversary.
A few minutes after this I altered course to South to try to pick up AMBUSCADE, steered for what I thought was her smoke, to find I was rapidly closing four large German Ships crossing my bows from Starboard to Port, course about N.N.E. at a high speed. It was too late to get away, so I attacked immediately and fired a torpedo from a favourable position at the leader, I could not see if it hit, as at once a most devastating fire was poured in on the ARDENT from the two leading Ships, who both had their searchlights on us. This bombardment continued for about five minutes when the enemy ceased fire and switched off, after which period the Ship was a total wreck, and appeared to be sinking. I then sank the Secret books, etc., and went aft to try and make a Raft, all our boats, Carley floats, &c. being smashed to bits. At this moment the enemy recommenced firing from point blank range, I gave the order "save yourselves," and about forty survivors jumped into the sea, with no support beyond lifebelts, waistcoats, &c., and shortly after the Ship sunk with her colours flying.
I was in the water about five hours before being picked up by MARKSMAN, and regret that up to date have heard of no more survivors. It is perhaps unnecessary for me to add that the Officers and Ship's company of the ARDENT behaved according to the highest traditions of the British Navy. All Ranks and Ratings fought the Ship until every gun was out of action with the utmost determination.
When all did their duty it is impossible for me to name any individual for special recommendation.

I have the honour to be.
Sir,
Your Obedient Servant,
A. MARSDEN,
Lieut. Commander, H.M.S. ARDENT.

Retrieved from "https://battleofjutlandcrewlists.miraheze.org/w/index.php?title=Marsden,_Arthur&oldid=21031"
Category:
Cookies help us deliver our services. By using our services, you agree to our use of cookies.