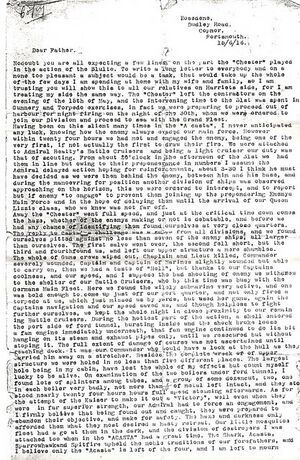 Nodoubt you are all expecting a few lines on the part the "Chester" played
in the action of the 31ult[im]o. To Write a long letter to everybody and on a
none too pleasant a subject would be a task, that would take up the whole
of the few days I am spending at home with my wife and family, so I am
trusting you will show this to all our relatives on Harriets side, for I am
trusting my side the same way. The "Chester" left the contractors on the
evening of the 15th May, and the intervening time to the 31st was spent in
Gunnery and Torpedo exercises, in fact we were preparing to proceed out of
harbour for night firing on the night of the 30th, when we were ordered to
join our Division and proceed to sea with the Grand Fleet.

Having been on this (salient?) many times in the " Acasta", I never anticipated
any luck, knowing how the enemy always evaded our main force. However
within twenty four hours we had met and engaged the enemy, being one of the
very first, if not actually the first to draw their fire. We were attached
to Admiral Beatty's Battle Cruisers and being a light Cruiser our duty was
that of scouting. From about 2 O'clock in the afternoon of the 31st we had
them in line but owing to their preponderance in numbers I assume the
Admiral delayed action hoping for reinforcements, about 3-30 I think he must
have decided as were then behind the enemy, between him and his base, and
during the manoevering for position another division of ships was observed
approaching on the horizon, this we were ordered to intercept, and to report
but if enemy "to engage" to prevent them joining up the prepondering Enemys
Main Force and in the hope of delaying them until the arrival of our Queen
Lizzie class, who we knew was not far off.

Away the "Chester" went full speed, and just at the critical time down comes
the haze, whether of the enemys making or not is debatable, and before we
had any chance of identifying them found ourselves at very close quarters.
The reply to Captains challenge was a no reply from all divisions, and we found
ourselves pitted against no less than seven of the enemy ships, all larger
than ourselves. The first salvo went over, the second fall short, but the
third and fourth found us, and left our upper structure a mere shambles.
The whole of Guns crews wiped out, Chaplain and Lieut Killed, Commander
severely wounded, Captain and Captain of Marines slightly wounded but able
to carry on, then we had a taste of "Hell", but thanks to our Captains
coolness, and our speed, and I suppose the bad shooting of enemy we withdrew
to the shelter of our Battle Cruisers, who by this time was busy with the
Germans Main Fleet. Here we found the wilely submarine very active, and one
was bold enough to come up just off our port quarter, and not only fired a
torpedo at us, which just missed us by yards, but used her guns, again the
Captains navigation and our speed saves us, and though helpless to fight
further ourselves, we kept the whole night in close proximity to our remain
ing Battle Cruisers. During the hottest part of the action, a shell entered
the port side of ford tunnel, bursting inside and the shock broke loose
a fan engine immediately underneath, that fan engine continued to do its bit
hanging on its steam and exhaust pipes only, until we resecured but without
stoping it. The full extent of damage of course was not ascertained until
reaching dock. It was our Commander who would have a look at the hull as they
carried him away on a stretcher. Besides the complete wreck of our upper
structure we were holed in no less than five different places The largest
hole being in my cabin, have lost the whole of my effects but count myself
lucky to be alive. On examination of the two boilers under ford (forward) tunnel, I
found lots of splinters among tubes, and a group of some dozencut, two, one
in each boiler very badly, not more than 1/2 of total left intact, and they sto
stood nearly twenty four hours hours full speed steaming afterwards. As for
the attempt of the Kaiser to make it out a "Victory", well even when they
were in far superior strength, our Admiral had to force an engagement, and
I firmly believe that being found out and caught, they were prepared to
abandon their objective, and make for safety. The haze and darkness only
afforded them what they most desired a hasty retreat. Our little mosquitos
fleet had a go at them in the dark, and the division of destroyers I was
attached too when in the "ACASTA" had a great time. The Shark, Acasta,
Sparrowhawk and Spitfire upheld the noble traditions of our forefathers, and
I believe only the "Acasta' is left of the four, and I am left to mourn 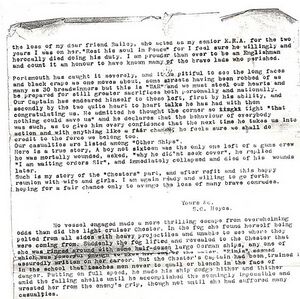 the loss of my dear friend Bailey, who acted as my senior E.R.A. for the two
years I was on her. "Rest his soul in Peace" for I feel sure he willingly and
heroically died doing his duty. I am prouder than ever to be an Englishman
and count it an honour to have known many of the brave lads who perished.

Portsmouth has caught it severely, and it is pitiful to see the long faces
and black crape as one moves about, some streets having been robbed of as
many as 30 breadwinners but this is "WAR" and we must steel our hearts and
be prepared for still greater sacrifices both personally and nationally.
Our Captain has endeared himself to those left, first by his ability, and
secondly by the two quite heart to heart talks he has had with them
congratulating us. He admitted he thought the corner so tight "that
nothing could save us" and he declares that the behaviour of everybody
was such, as to give him every confidence that the next time he takes us into
action and with anything like a fair chance, he feels sure we shall do
credit to the force we belong too.

Our casualties are listed among "Other Ships".
Here is a true story, A boy not sixteen was the only one left of a guns crew
he was mortally wounded, asked, "why he didn't seek cover", he replied
"I am waiting orders Sir", and immediately collapsed and died of his wounds
later.

Such is my story of the "Chesters" part, and after refit and this happy
reunion with wife and girls. I am again ready and willing to go forth
hoping for a fair chance only to avenge the loss of many brave comrades.


No vessel engaged made a more thrilling escape from overwhelming
odds than did the light cruiser Chester. In the fog she found herself being
pelted from all sides with heavy projectiles and unable to see where they
were coming from. Suddenly the fog lifted and revealed to the Chester that
she was ringed around with some half-dozen large German ships, any one of
which was powerful enough to blow her out of the water. "Finis" seemed
assuredly written on her career. But the Chester's Captain had been trained i
in the school that teaches men never to quail or blench in the face of
danger. Putting on full speed, he made his ship dodge hither and thither
amid the falling shells until he accomplished the seemingly impossible and
wrested her from the enemy's grip, though not until she had suffered many
casualties.

Retrieved from "https://battleofjutlandcrewlists.miraheze.org/w/index.php?title=Heyes,_Sam_Coope&oldid=18271"
Category:
Cookies help us deliver our services. By using our services, you agree to our use of cookies.