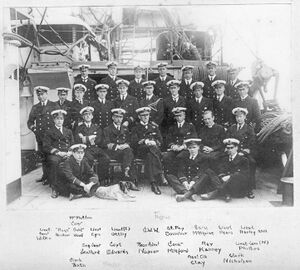 Admiral Napier, Captain Edwards, and officers of HMS Falmouth with "Kaiser Bill". There are no Midshipmen in this photo, and indeed none were serving on the ship at Jutland. Captain John Hicks, RM, is absent.

+ The Rev A.B.L. Karney was not on HMS Falmouth at Jutland, but was present as Acting Chaplain of HMS Yarmouth.

Retrieved from "https://battleofjutlandcrewlists.miraheze.org/w/index.php?title=HMS_Falmouth_Group_No_2&oldid=18457"
Category:
Cookies help us deliver our services. By using our services, you agree to our use of cookies.