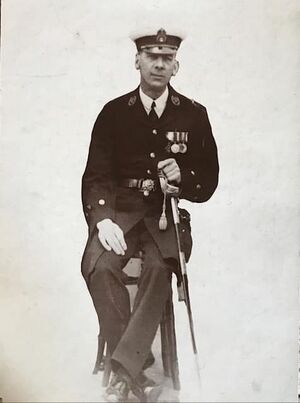 Born Portsea Hampshire October 1890, entered the Navy as Boy 2nd Class in October 1906. By the outbreak of hostilities in August 1914 he was a Leading Seaman on the destroyer Mohawk, commanded by the ex-Scott Polar hand Commander ERGR Evans. He remained similarly employed in the Dover Patrol, till posted ashore to Victory and then the gunnery school, HMS Excellent. In August 1915 he joined the battleship Canada, remaining with her until the war's end. he advanced to Petty Officer and was present at Jutland, where she fired over 40 14" shells. Awarded his L.S. and G.C. medal in 1923, he was appointed Master at Arms in January 1926, and was still serving in that rate on the eve of the 1930s; source his great great niece Steph Joynson.

Retrieved from "https://battleofjutlandcrewlists.miraheze.org/w/index.php?title=Eves,_John_Eden&oldid=18310"
Category:
Cookies help us deliver our services. By using our services, you agree to our use of cookies.