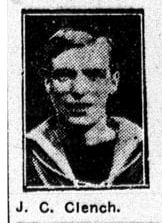 Name wrongly given as J C rather than J E in this report in the Toronto Telegram, August 1916.

FROM ENGLAND
"My father came to Canada three
years ago from Bournemouth, Eng-
land, and he went back with his
Battalion in March.

"I've a step-brother in the navy
J. C. Clench. He's twenty-six, and
he's been there six years. Just now
he's leading stoker in a naval bar-
rcks. He's served on the Weymouth,
the Eclipse and the Fearless. the
Fearless is one of the large boats,"
he added with a touch of pride.

"That's quite a number of you
serving for "King and Country", said
the reporter. "Your family seems to
be doing more than its 'bit.'"

"I have a brother-in-law at the
front, too, Walter Blair. He's with
the transport."

Retrieved from "https://battleofjutlandcrewlists.miraheze.org/w/index.php?title=Clench,_John_Edwin&oldid=27051"
Cookies help us deliver our services. By using our services, you agree to our use of cookies.