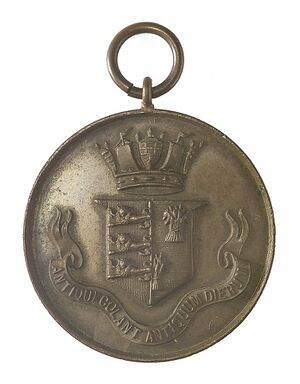 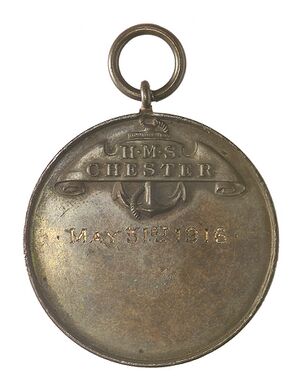 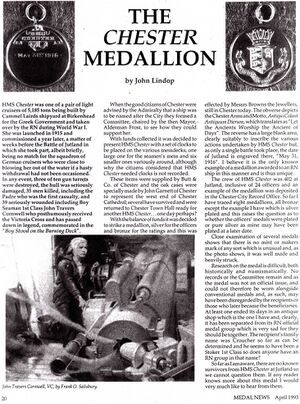 Nantwich Guardian - Friday 08 December 1916 (Page 5)
H.M.S. CHESTER.
The Mayor of Chester has been
requested by the Commander of H.M.S.
Chester to convey his thanks and those of
the officers and crew to the citizens of
Chester for the great interest they have
taken in his ship, and also for the gifts
that were sent, particularly the medallions
as mementoes. Captain Lawson looks
forward to the days of peace, when he
may have an opportunity of visiting the
city and bringing with him, if possible,
some of the ship's company.

The medallions referred to are of
bronze and beautifully designed. On one
side is the Chester coat of arms with a
garter bearing the city's motto. "Anti
qui colant anti quum dierum," the whole
being surmounted by naval crown. On
the reverse side is the name of the gallant
ship, H.M.S. Chester, with an anchor and
the date of the battle of Jutland, May
31st. 1916. The medallions have been
given by the committee with the Mayor
at the head, who presented the clocks and
other gifts to the ship, and not only has
each officer and member of the crew
received one, but also the next-of-kin of
all who fell in the action.

The Chester Medallion
The article below was written by
John Lindop and was published
in the April 1993 edition of 'Medal News' Permission
to reproduce this article has been granted by John Lindop.

HMS Chester was one of a pair of light
cruisers of 5,185 tons being built by
Cammel Lairds shipyard at Birkenhead
for the Greek Government and taken
over by the RN during World War I.
She was launched in 1915 and
commissioned a year later, a matter of
weeks before the Battle of Jutland in
which she took part, albeit briefly,
being no match for the squadron of
German cruisers who were close to
blowing her out of the water if a hasty
withdrawal had not been occasioned.
In any event, three of ten gun turrets
were destroyed, the hull was seriously
damaged, 35 men killed, including the
Padre who was the first casualty, and
39 seriously wounded including Boy
Seaman 1st Class John Travers
Cornwell who posthumously received
the Victori Cross and has passed
down in legend, commemorated in the
"Boy Stood on the Burning Deck".'


When the good citizens of Chester were
advised by the Admiralty that a ship was
to be named after the City they formed a
Committee, chaired by the then Mayor,
Alderman Frost, to see how they could
support her.
With funds collecrted it was decided to
present HMS Chester with a set of clocks to
be placed on the various messdecks, one
large one for the seamen's mess and six
smaller ones variously around, although
why the citizens considered the HMS
Chester needed clocks is not recorded.
These items were supplied by Butt &
Co. of Chester and the oak cases were
specially made by John Garnett of Chester
to represent the west end of Chester
Cathedral; several have survived and were
returned to Chester Town Hall ready for
another HMS Chester ... one day perhaps?
With the balance of funds it was decided
to strike a medallion, silver for the officers
and bronze for the ratings and this was


effected by Messrs Browns the Jewellers,
still in Chester today. The obverse depicts
the Chester Arms and Motto, Antiqui Colant
Antiquum Dierum, which translates as "Let
the Ancients Worship the Ancient of
Days". The reverse has a large blank area,
clearly suitable to inscribe the various
actions undertaken by HMS Chester but,
as only a single battle took place, the date
of Jutland is engraved there, "May 31,
1916". I believe it is the only known
example of a medallion awarded to an RN
ship in this manner and is thus unique.
The vrew of HMS Chester was 402 at
Jutland, inclusive of 24 officers and an
example of the medallion was deposited
in the Chester City Record Office. So far I
have traced eight medallions, all bronze
except the example I have which is silver
plated and this raises the question as to
whether officers' medals were plated
or pure silver as mine may have been
plated at a later date.
Close examination of several medals
shows that there is no mint or makers
mark of any sort which is unusual and, as
the photo shows, it was well made and
heavily struck.
Research on the medal is difficult, both
historically and numismatically. No
records or(of)the Committee remain and as
the medal was not official issue, and
could not therefore be worn alongside,
convential medals and, as such, may
have been disregarded by the recipients or
those who later became the beneficiaries.
At least one ended its days in an antique
shop which is the one I have and, clearly,
it has been separated from its RN official
medal group which is very sad for they
should be together. The recipient's family
name was Croucher so far as can be
determined and he seems to have been a
Stoker 1st Class so does anyone have an
RN group in that name?
So far as I am aware, there are no known
survivors from HMS Chester at Jutland so
we cannot question them. If any reader
knows more about this medal I would
very much like to hear from them.

John made the following comments on 6th September 2017.
Since the article was written ( my goodness, was it really 24 years ago,
how time flies ??!! ) some more gen has emerged and the article needs
modifying appropriately viz; there were no medallions struck in silver
for the officers, they were all bronze when awarded and some were
plated later for the recipients, some silver, hence
the confusion and some mercury gilded, additionally some
had details engraved in addition to the already engraved May 31st.,1916 ,
names, numbers, Battle of Jutland etc , some round the rim and
some on the blank space on the reverse.

They were apparently struck by Spinks and supplied by Browns
the Jewellers of Chester; they are no longer in biz.
Since the article about 25 medallions have surfaced.

Retrieved from "https://battleofjutlandcrewlists.miraheze.org/w/index.php?title=Chester_Medallion&oldid=29875"
Cookies help us deliver our services. By using our services, you agree to our use of cookies.